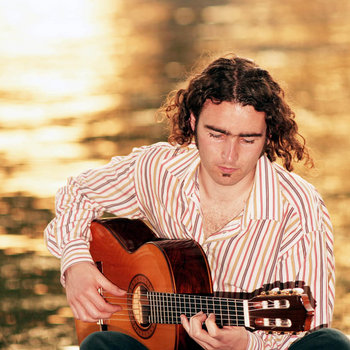 Una Leyenda is a collection of Spanish guitar music,
by composers including Rodrigo, Torroba, Sanjuan, Jose and Llobet.

Federico Moreno-Torroba was a successful composer of zarzuela - the Spanish operetta
and one of the first composers to write for the guitar at the request of Andres Segovia. His
Sonatina was written in the 1920s and has remained a favourite ever since. It is a piece of
irresistible charm and highlights Torrobas gift for melody and craftsmanship.

Recent discoveries in the archive of Andres Segovia have revealed a wealth of previously
unknown works.
Written in 1923 and marked tranquillo y poetico, Pedro Sanjuans
only guitar work is one of the more lyrical and is typical of the Spanish romantic style.
It is perfectly written for the guitar, exploiting the warm tones that Segovia produced so
perfectly and it remains a mystery as to why the maestro never performed it. Sanjuan
emigrated to Cuba in 1924 and founded the Havana Philharmonic Orchestra, he became
known as El blanco con alma negra (The white man with a black mans soul) after
becoming the first orchestral composer to assimilate authentic African rhythms into
his music.

Francisco Tarrega is considered to be the father of the modern guitar. Using the newly
designed guitars of Antonio Torres, Tarrega became a famous player, teacher and
composer, transcribing for the first time many pieces from composers such as Beethoven
and Chopin. Among his many pupils were the excellent Emilio Pujol and Miguel Llobet.
His Capricho Arabe is one of his most popular compositions and beautifully evokes the
moorish Spain of Andalucia.

Un tiempo fue Italica Famosa tells the story of the rise and fall of the once great Roman
city of Italica. Situated near Seville, all that remains today are a few beautiful mosaics and
the ruins of an impressive amphitheatre. Written in 1980, this was one of Rodrigos last
guitar compositions and may be viewed not only as a reflection upon the transitory nature
of mans achievements but also upon his own life. The piece begins with mysterious,
dark sounds and virtuosic flamenco passages which give way to a cheerful Sevillianas
dance before once again returning to the atmosphere of the opening. Rodrigo then
demands fierce, almost defiant scales of immense difficulty before a passage of mysterious
harmonics end the piece with perhaps a hint of optimism.

Miguel Llobet was born into an artistic family and at 14 was presented to Tarrega,
becoming one of his youngest pupils. He launched his performance career in 1901 and
annually toured Europe and the Americas before the outbreak of the Spanish Civil War.
His arrangements of Catalan Folk Songs have charmed audiences for over a hundred
years - his intimate understanding of the possibilities of the guitar, for example - his
use of harmonics and placement of melody for maximum resonance combined with his
knowledge of the French impressionists help him squeeze every nuance of expression
from the instrument.

Antonio Joses Sonata para guitarra was completed in 1933 but remained in obscurity
until 1990 when it was first recorded by Ricardo Iznaola - a pupil of the Sonatas
dedicatee Regino Sainz de la Maza. The work lay dormant after Jose, like his friend
Federico Garcia Lorca was shot by firing squad during the Spanish Civil War. The sonata
itself is one of the most ambitious guitar works ever written in both scale and scope.
The four movements display a huge range of expression, the first is in sonata form and
demonstrates Joses beautiful harmonic language, the second is a gracious and rather
enigmatic minuet, the melancholic Pavane triste is hauntingly beautiful and the final is a
defi ant Allegro con Brio which features a repeated powerful rhythmic motif contrasted
with sections of the first movement which culminate in an explosive conclusion.

Romance de los Pinos (sometimes subtitled contemplation) is one of Torrobas most
perfect miniatures. Segovia recorded differing versions of the piece in 1961 and 1969 and
my interpretation was inspired by both to make a fitting encore to this collection.